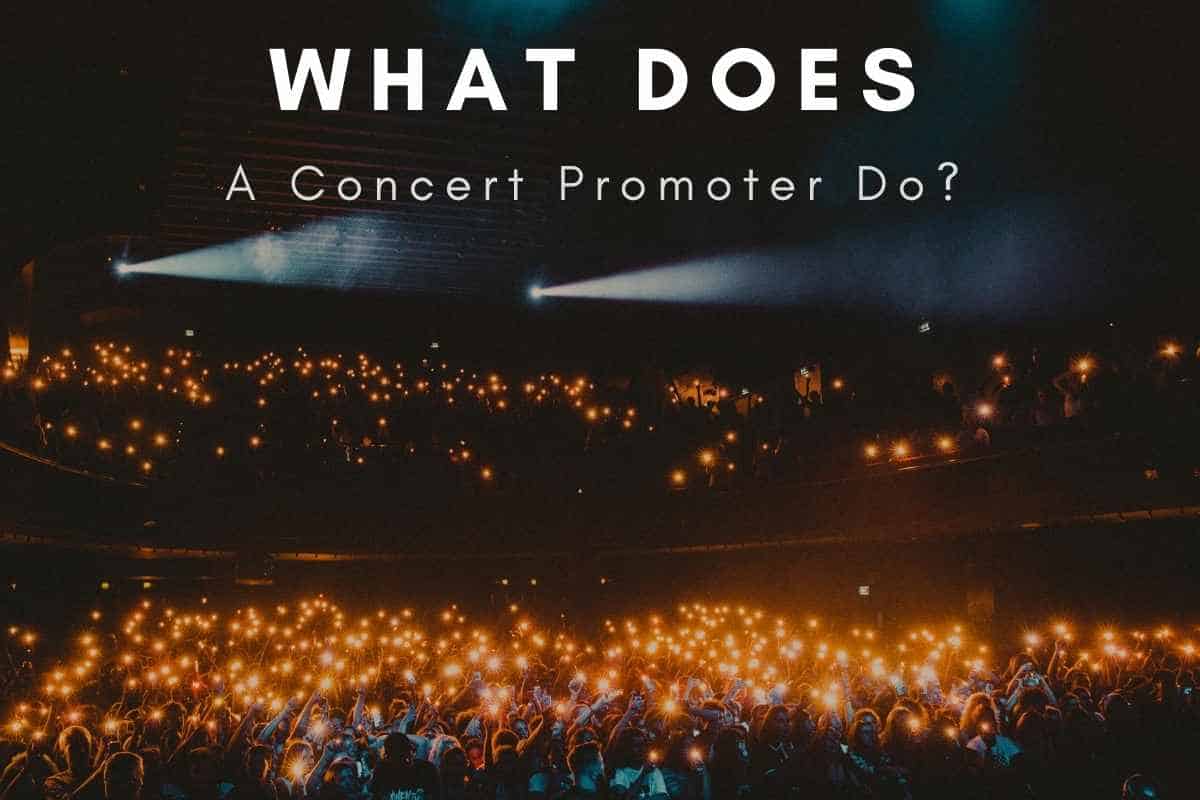 Being a concert promoter isn’t necessarily for the faint-hearted. you have to have a real passion for the music you want to promote and a good work ethic to succeed in this highly competitive industry. I was an event promoter for over 10 years promoting a variety of live music and club nights events and I’m going to share with you some of the skills I picked up along the way.

A concert promoter is responsible for “putting on the show”, that is to say they perform the following functions:

A concert promoter isn’t always tied to a venue, but sometimes they can be. Promoters book or hire venues where they want to promote shows.  If they already work at a venue then the roles are still very similar.

I was a venue manager for over 10 years (I didn’t own the venue), and booked in countless live shows, club nights and other performances. No two shows are the same and promoting any show is hard work. It’s often sold as a glamorous role, but the reality is you’ll spend hours sitting at a computer or on the phone arranging a multitude of different things.

Days can be long and hard work, especially if ticket sales are slower than you anticipate.

BUT….it’s worth it all when the show has sold out, you’ve made your money and you can see people having a good time. That’s the passion that drives promoters.

What does a concert promoter do?

A concert promoter may be an employee of a venue, own the venue or just be a freelance promoter who uses different venues around a town or city. Some promoters start just hiring small venues and promoting local bands before moving up to buy their own venues.

There are plenty of similarities across all of these different levels, so let’s dive into this in more detail to understand what convert promoters do.

The one thing you need to realise about agents is that they work for the band. They usually get a % commission from the booking fee you pay. It is therefore in their interest to try and make the band booking fee as large as possible in order to get the most commission.

I met some really nice ones and some less nice. As long as you maintain a professional front at all times then you’re on solid ground.

When bands are looking to build a fan base then their agent will try to ‘route’ a series of gigs in succession. This might form the basis of a larger tour.

A concert promoter needs to understand where any particular band is in their journey. Are they playing 100, 300, 1,000 or 10,000 capacity shows? Correctly identifying this will save you wasting the agents time. Agents have a role to play in building the profile of their acts so won’t usually entertain booking them into a smaller venue.

Sometimes, there is value in partnering with similar sized venues in surrounding cities to form a block booking. This means the agent gets say three shows for the time it takes to secure one. It may also mean you can negotiate a small discount (not always though!), it may just help to secure the show.

Negotiating with agents is a tricky business. Be careful of just asking what the price is, the answer you get will be determined by a number of factors: how well the agent knows you, if you have booked previous shows, potential to ‘route’ a band tour your way and the popularity of the band. There may still be some wiggle room in that price if you have some good haggling skills.

Negotiation doesn’t just end with the price. A concert promoter also needs to sign off on the band’s rider requirements. Again this can be a negotiation sometimes. See the section below on band riders for more information.

After all of this has been agreed, a contract is signed. Once you pass this point there is a legal commitment to delivering everything agreed so make sure you are happy and can deliver it or there will be trouble ahead. The agent may have a representative on-site at the gig to ensure everything goes off as agreed.

Working with bands to get them to play.

If you’re aiming to just host local bands with a small capacity venue then you may find that you need to deal with the band directly or (if they have one) a local manager. It’s not uncommon for that manager to be a parent or a close family friend in my experience!

In this situation negotiation can be much more informal, although everything should still be agreed in advance and a simple contract or agreement signed to avoid any unnecessary confusion or issues on the day.

It is the concert promoters responsibility to check all of these details to avoid any surprises on the day of the show.

Once the venue and bands are confirmed then the tickets need to be put on sale. If this is just a local band night then tickets can go on straight away. If the concert promoter knows there will be demand for the tickets, they may want to spend some time to build up the sale date, using it to their advantage to build things like their email list in exchange for priority access.

If tickets are likely to be in demand then a robust and trusted online ticketing platform needs to be used. When deciding on which ticketing system to use for a live show, consider the following factors:

Ideally a system that has the lowest charges, is robust and automates the ticket delivery is going to be the best option. Do some research to find out those that best suit your needs, you can find some of the best ticketing platforms on our resources page.

Advertising a show could form an entire blog post on it’s own as it is probably the most important job that a promoter does. A lot will depend on the size of the show, the location and the resources available.

This part of the job is definitely a skill and if there is one thing I’ve learnt, it’s that if you’ve thought you’ve done enough, you probably haven’t. I’ve seen many people underestimate the amount of work and time needed to correctly promote a show.

Any concert will need branded artwork for advertising. While this is increasingly in digital form for social media platforms, the traditional print equivalents shouldn’t be discounted.

A graphic designer would normally do this as they have the skills to make the artwork look credible. Another word on agents here, often they will want to sign off on the artwork to ensure correct logos have been used as well as agreed positioning (headliner/support act etc.).

For very large shows (10,000+) the lead time for promotion and advertising could be up to 12 months.

Clearly in today’s word, marketing events online is the key place. However, there is a big difference between being a prolific USER of social media and being a COMPETENT promoter on it. Promoters need to be very good at understanding how to use social media for business.

Again, this area alone could be covered in its own blog post, but it’s really important to first understand who your target audience is, then serve them relevant and timely advertising and promotion in places they will see it. That goes for both online and offline advertising.

If there were three general areas to focus on, they would be:

There are two types of rider than most concert promoters will be concerned with, the technical rider and entertainment rider. Both should have been agreed in advance with a bands agent or other representative.

Mostly the technical rider should be fine, a concert promoter should have a good sound engineer to hand. Many of the technical staff in the industry work as freelancers so it pays to maintain a good relationship with a handful of crew so you always have people to call on.

Most of the fun comes from agreeing the entertainment rider requirements that will include food and drink for the band and their crew, alcohol requirements, number of dressing rooms and much more. Don’t be afraid to push back on the agent if you think anything is unreasonable.

Again, with both of these, failure to provide the detail agreed will result in major headaches for the concert promoter on the day. The key is being organised in advance to ensure everything is taken care of.

The concert promoter will need to specify the set time in accordance with the venue curfew times. This varies depending on their license and in particular if the venue is outdoors (likely to be earlier).

The concert promoter will set the show times, which includes things like band ‘get in’ time, sound check times, opening times and running order. There may be a requirement on finishing times due to licensing or noise restriction with local residents. This is often a good starting point and then work backwards. Restrictions are often much tighter on outdoor shows than indoor shows.

What skills do you need to be a concert promoter

Being a concert promoter is a tough job, but potentially hugely rewarding. Discovering the next big thing and booking them just as their profile is taking off can help to really earn a promoter good money. But those opportunities are often few and far between so what other skills are important.

Some people have more of these than the others but a concert promoter will need to develop all round skills if they are to be successful. Best of luck!

Mark has over 20 years of experience in the events industry from working in live music venues through to major outdoor events like the Olympic Torch Relay and the Tour de France. He now works as a feelancer, consultant and Senior Lecturer in Events Management.

link to How do venues make money?

Event venues come in all shapes and sizes, but often there are common income sources across each. Understanding what these are and how to maximize them is key to turning a profit with your...

Continue Reading
link to What is Event Design?

The concept of event design is often confused with just being about the event decoration, but it goes much beyond that. With over 20 years of experience in events, I understand how events are...

Mark has over 20 years of experience in the events industry from working in live music venues through to major outdoor events like the Olympic Torch Relay and the Tour de France. He now works as a freelancer, consultant and Senior Lecturer in Events Management.